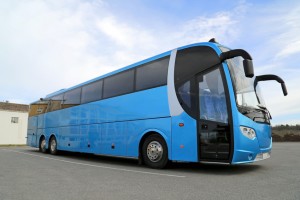 Traveling by charter bus is one of the most efficient means of travel out there. Here are four of the many benefits of charter bus travel.

Safety
Bus travel is the safe option for many reasons. Charter bus drivers are experienced in driving in all types of weather and conditions, and are committed to getting passengers to their destinations safely and in a timely manner. And having someone else at the wheel allows you to get that extra shut eye you would have missed out on had you driven yourself!

Eco-Friendly
Did you know that a full charter bus has the potential of removing 55 cars from the highway? Not only does that save many individuals the inconvenience of gas prices and traffic, but it also significantly reduces the amount of carbon emissions. Of all of the vehicles on the highway, charter buses emit the least amount of carbon dioxide per passenger and are six times more fuel efficient than regular cars. In fact, if a single car switched to motorcoach travel instead, they would reduce their carbon dioxide emissions by 4.3 tons annually. When you travel by bus, you know that you’re traveling the most ecologically friendly way possible.

Versatility in Use
Whether you’re looking for a ride to the airport, a way to tour the city, or a means for adventure, buses are the most versatile and easy travel option. Airport shuttle services, for example, are easy and convenient means to getting to the airport without having to worry about parking and overnight fees. If you’re looking to tour NYC, with so many things to do, sometimes charter bus rentals make it easy by bringing you from one spectacular attraction to the next. With buses, the possibilities are really endless!

Easy Travel
Air travel isn’t exactly seamless travel. Rather, it requires a great deal of lines, security checks and running from one location to the next. With charter bus rentals, traveling to your favorite local destinations such as Atlantic City or NYC is easy. All you have to do is show up on time and be ready to make long-lasting memories!